Reflections on the first term

Home > Blog: Life in the Novitiate > Reflections on the first term

As we approach Christmas we thought we would take this opportunity to reflect on our first three months of the novitiate. These first few months are set aside for us to begin our lives as Dominicans. This means settling in, getting use to the way of life, the routine of the daily office. The novices have also begun our classes in: Latin, Prayer, History of Religious Life, Lives of Dominican Saints, singing, Rule and Constitutions and Liturgical and Spiritual Praxis. 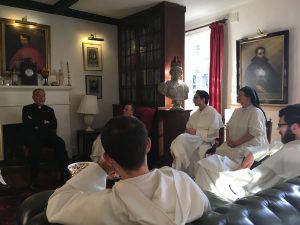 On top of our classes the novices have also had the opportunity to visit other Priories of the Order and meet with the wider family of Friars. This included having the opportunity to visit our London Priory on a number of occasions. The first of which was to celebrate the 150th anniversary of the parish as well as the one year anniversary of the dedication of the Rosary Shrine. The culmination of the day was Mass celebrated by Archbishop Malcolm McMahon, OP. The novices then attended the Rosary Shrine on two further occasions, the first for an evening Eucharistic Rosary procession with music by members of the Dominican Liturgical Centre in Krakow. Not only did this give us the opportunity to meet with members of the Dominican Family for Poland but also gave us the opportunity to take part in the rich musical history of our Order. A number of the novices made up the choir whilst the others took part in the procession. The day consisted of music practice as well as learning about the rich history of music within our Order as well as the role it plays within the liturgy. The day ended with the procession and Benediction. 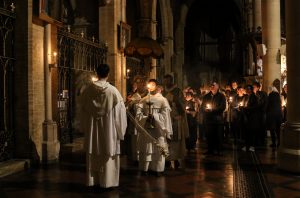 Our Third visit to the Rosary shrine was for the feast of Our Lady of Guadalupe where Mass was celebrated by the Papal Nuncio and the reception of the 3rd class relic of Our Lady of Guadalupe. The novices also took this opportunity to explore the Catholic history of London which saw them visit both Westminster Cathedral as well as Westminster Abby and the shire of St Edward the confessor. On all three of these occasions the novices have had the opportunity not only to meet with other members of the province but also to take an active part in the life and liturgy of the province as a whole.

Last Saturday the novices along with other members of the community visited Holy Cross Priory in Leicester for our Provincial away day. The theme of this away day was looking backwards so that we can look forwards. The day was split into three parts first ‘The Past’, this involved a talk by Fr Richard Finn on the History of the province as we near or 800th anniversary. ‘The Present’ which involved getting to meet friars from across the province and building the fraternal bond, and finally ‘The Future’. This involved each of the Houses and Priories sharing the hope and projects for the coming years. This gave the novices the opportunity to not only meet with other friars but also to learn a little more about the history of the province as well as to see where we as a province will be going in the future.

All in all the past few months have been a great introduction to the life of a Friar with in the English Province of the Order of Preachers.