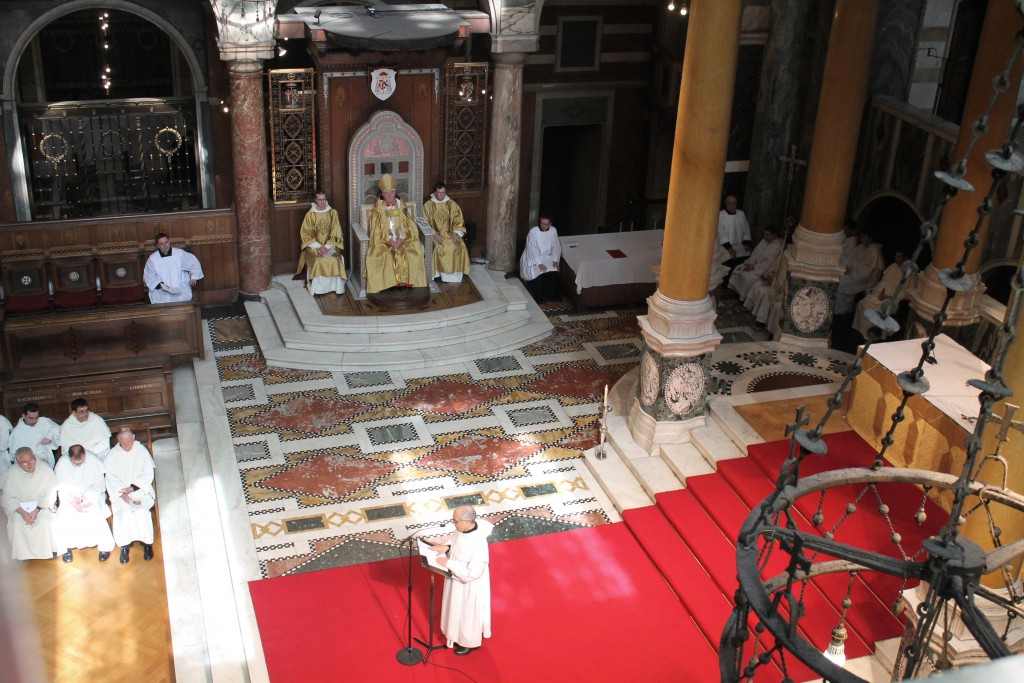 Here is the address from the Master of the Order, fr. Bruno Cadore OP, at the Jubilee celebrations at Westminster on Friday April 29th, the feastday of St. Catharine of Siena:

“I thank you for inviting me to say some words on the occasion of this celebration of the Jubilee of the Order of Preachers. In the first place permit me to give thanks to the Lord, who holds all things in His hands. Celebrating the Order’s Jubilee invites us in effect to acknowledge the many signs of the Lord’s fidelity in the long course of our history. And this is so in spite of the weaknesses, mistakes, and hesitations that mark this history. The celebration of a Jubilee is the right moment, is it not, for asking, once again, for the help to adjust our own fidelity to that of God? It means to root our fidelity in God’s, and to engage our commitment for the future counting on His faithfulness.

“We celebrate this year the eight hundredth anniversary of the confirmation of the Order of Preachers by Pope Honorius III. Dominic de Guzman took the initiative in this project, an initiative that we would describe today as that of a renewed evangelization, renewed in its zeal, in its methods, in its language. Renewed in zeal because it sought to respond to men and women who had become weary or disappointed with the Church as they experienced it, and who had chosen instead a return to evangelical radicalism. In choosing to lead a way of life that was itinerant and mendicant, Dominic wanted to echo this radicalism while seeking to ensure that it would be, at the heart of the Church, a source of unity rather than a reason for division.

“It was an evangelisation renewed also in its methods. In choosing to walk in the footsteps of Jesus, the preacher of Galilee, Dominic and his brothers wanted to approach people in friendship so that by coming close to people, as Jesus did, they could invite them to desire a deeper friendship with God.

“It was an evangelisation renewed too in its language. They went to study in those places where new forms of knowledge were being developed, so that the language of the faith would be strengthened by its conversation with the languages of these other ways of knowing.

“One group in the Order has chosen to place its celebration of this year’s Jubilee under the motto ‘Dominicans, eight hundred years of new evangelisation!’ In this time of globalisation, of new social networks and media, of the desire and promise of an ‘augmented’ humanity, of interminable conflicts which seem to say that humanity is incapable of learning the lessons of its history of devastating violence, of ways of knowing that grow exponentially – this renewal of a simple word, which expresses the presence and promise of a Word which makes all things new, is a huge challenge to be accepted with great humility!

“In fact our celebration of the Jubilee of the Order of Preachers calls us to have this ‘courage for the future’. I would say that the year 1216 marked the confirmation of an initiative, born from Dominic’s intuition of an urgent necessity, and which he passed on as an inheritance to his brothers. This inheritance from Dominic de Guzman is not a well-established and immobile institution. What he has left to his brothers and sisters is an inheritance that requires continual confirmation. This confirmation of the Order remains always to be redone, as we seek to allow ourselves to be inspired again by the intuition of the beginnings: to offer to the Church, in a way that is continually renewed, an Order of Preachers.

“This, it seems to me, is the profound joy of the brothers and sisters as they celebrate the Jubilee today. It is the profound joy of knowing that we stand in the wake of those mendicant itinerants who rediscovered, for their time, the ways of the preaching of Galilee, following the One who wished them to be ‘consecrated in the truth’. It is the joy also of having those whom we might ‘take after’, to be able to draw on the example of great figures following whom we preach: Bede Jarrett, prior provincial in England at the time of the last centenary, Vincent McNabb, a most remarkable preacher, great theologians like Victor White and Herbert McCabe, apostolic sisters like Margaret Hallahan and Rose Niland – and many others known or forgotten. Yes, the celebration of the Jubilee of the Order is an opportunity for the brothers and sisters of this great family to confirm their determination to be preachers who live out of this treasury of joy.

“The joy of being preachers! That is the hope I would like to express today for each and every brother and sister of the Order of Saint Dominic. It is this joy that can give us such courage for the future as to make us preachers of hope, and witnesses of the friendship of God, the hope and friendship that transform the world.”