A very timely meditation on Catholicism and Black Lives Matter from our friend Eddie Zengeni, a Black man and a Roman Catholic. He presents us with some hard truths about the reality of anti-Black racism. He also shows that, if we are willing to be converted and face those hard truths, how Christian charity can empower us to make real change . Eddie and his family are members of the Blackfriars congregation.

From the 1950s until 1980, my father was a black political activist. He campaigned for the de-colonization of his native Zimbabwe, then Rhodesia, from under the yoke of the British Empire. I never forgot the stories he told me of how blacks were treated as second-class citizens in their own country. His aim was to bring an end to minority white rule and for his people to have a collective say in the destiny of their future. A tall order, especially at a time when blacks couldn’t even share the same toilets as whites, leave alone share power.

Eddie’s father in Cape Town in the 1950s

My parents met in the late 50s at the British Council in London. Back then, mixed-race couples were a rare sight. I remember my mother, who was Irish, telling me about the now-infamous signs on Bed and Breakfasts that read: ‘No Blacks, No Irish no Dogs.’ My mother told me she had to ring up in advance and check it was all right for her to bring her black husband on their honeymoon. ‘I didn’t want to end up spending a night in a kennel with your Dad’, she said years later.

Racism is an uncomfortable and complex conversation that many of us tend to avoid whenever possible. No one, especially in their protective, white, middle-class bubble wants to be reminded of the dark days of slavery and colonization. No one enjoys listening to an angry black man, resentful of the past when his ancestors were persecuted, held in chains and sold as property. It’s not quite the sort of topic you bring up at a cocktail party, is it? And if it does come up, it’s not uncommon for it to be met with comments such as ‘Can’t we just forget it about it now and move on? It was such a long time ago.’

But as a Black man myself, getting by in a white-dominated world, not only are you encouraged not to mention it, you’re required to adopt the ‘bootstrap theory’ and ‘just pull yourself up’. The pain, trauma and stress of racism had to be buried and forgotten…everything on the surface has to appear hunky dory… 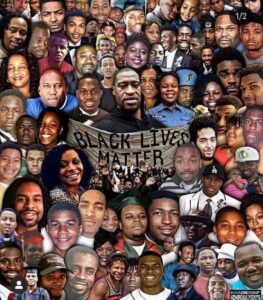 African-Americans who have recently been killed in racist attacks. Yes, this many…

But in this extraordinary year of 2020 racism has raised its ugly head again with the murder of George Floyd. A black man of the same height, build, age, even the same dress sense as me. It took 8 minutes and 46 seconds for the police officer to squeeze the life out of him with his knee on his neck as he lay helpless on the street. Seeing him getting murdered was like seeing myself getting murdered. It was viscerally painful and traumatic on a very personal level. He was begging for his life, while four other officers watched on and acted as crowd control. What’s even more astonishing is that the police officer thought that he could quite easily murder this man in broad day light. He did not even flinch at the fact that the whole sordid scene was being filmed by a passerby on her mobile phone.

It was this summer that the whole world; black and, maybe even more importantly, white finally said ‘enough is enough’. Protests erupted across the globe in the midst of the pandemic. Statues of slave traders were being pulled down. Millions of angry chants of ‘No Justice No Peace’ and ‘Black Lives Matter’ became anthems. Nothing like it had been seen since the late 60s.

But where was the Catholic voice?

I was disappointed that a significant number of my fellow Catholics were either at best indifferent or at worst, downright ignorant of the plight of black people in this post-slavery world.

Then, on investigation, I realized that many Catholics believe the Black Lives Matter movement is some sort of ‘gateway drug’ into a Deep-State, Marxist, godless dystopia, a lost group of dissidents ready to rage and rip up the system.

The amount of ‘What abouts’ I’ve had to endure with a superficial smile and an agreeing nod, is endless. It seems many people are ready to hijack and distort this cause for their own ends. And some of those arguments are articulated in very sophisticated ways. Each one I noticed was slightly different, but the one thing they all had in common, they all boiled down to the same point: That ‘the problems of Black people, ain’t my problem’.

However, for me as a Black Catholic, I saw things differently…Firstly I was directly influenced by this social disease: The amount of racism I have had to endure, both casual and aggressive could easily fill another page. The stories and experiences we grew up with formed our characters to such an extent, that Black people have a completely different relationship with reality.

But this also runs deep because as a practicing Roman Catholic, I was taught to love my neighbour, and not be indifferent to the suffering of others.

‘’Well what can I do?”, you might think. I hardly know any black people!’’  That may be true for some of you, there aren’t actually loads of us around. However, taking the time to read this article, you are already making a start. But if you want to go further, being more aware of racism in the workplace is another good initiative. Or maybe even pulling up the drunk uncle at the Christmas table, you know, the one who’s from another generation and who ‘doesn’t really mean it’ – these are the kind of things that help. And also keep an open mind about the cause.

Education for a greater understanding of our rich cultural heritage is also essential. In reaction to our struggle under the most horrific of conditions, Black people have created a vibrant culture of hope and love which has sprung forth and illuminated the world: I always said the best thing to come out of slavery was the music. Especially Gospel, which might not be Catholic, but it does possess a unique, soulful and unadulterated celebration of the glory of God. It is also testimony to the human spirit’s ability to overcome the most difficult of circumstances. It’s time we leant more of this. 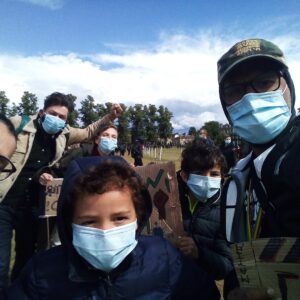 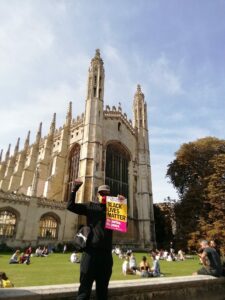 As a final thought, at the beginning of Mass, we confess that we have sinned with the words, ‘’In what I’ve done and in what I have failed to do’’. So let’s spare a thought at this momentous time through a prayer, a kind word and a good deed. To stand up and be counted in the face of racism, even when it might be uncomfortable and we could just let it slip…Let’s not cross over the road like so many did before the Good Samaritan came along. If there’s anything our Lord taught us, it is that a lukewarm Christian is a contradiction in terms. So let’s be that Good Samaritan. Let us not fail to do.

You can also read Eddie’s meditation on being a Catholic father during lockdown.