Da Pacem, sung by Opchant. Dominican Chant is a distinctive tradition within the Gregorian chant family, sung quite briskly. It preserves many medieval chants, and is a living tradition, with new chants being written, often in modern languages. The recording here, by Brs Stefan Ansinger and Alexandre Frezzato. Br Stefan is a Dutch Dominican who made his noviciate here at Blackfriars, Cambridge, and our inclusion of Opchant reflects the ongoing collaboration between the Dutch and English Dominicans.

Translation of the chant:

Give peace, O Lord to those who wait for you, that your prophets be found true. Hear the prayers of your servant, and of your people Israel.

Eddie’s song commemorates the birth of his son. 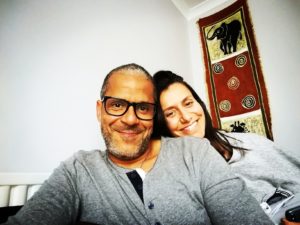 Eddie Zengeni is a Radio Maria DJ, painter and musician of Black Zimbabwean and Glasgow Irish heritage (click here for Eddie’s visual art and biography). You can also read Eddie’s blog posts for Blackfriars on Black Lives Matter and on fatherhood under lockdown.

I’ll hold your hand all the way,

Over mountains and lakes, through the storms and the winters cold.

All the way from Abbruzzo to Wedza, Dublin, Derry to Rome, you’re the image of our love,

You are more precious than gold, we share the same heart and soul.

You’ll have your own cross to bear sometimes this life just ain’t fair,

But truly I tell you, Don’t be afraid I’m here.

You broke off all of my chains, St. Patrick’s won’t be the same again,

I don’t know where you’ve come from, but now your life has begun, here in this wonderland,

We’re all here to learn how to love, from the heavens above, you know that we have a guiding hand.

Born on the banks of the Tiber, you’re a fighting survivor,

I don’t know what the future will hold that’s not ours to know,

But truly I tell you, don’t be afraid I’m here…

You broke off all of my chains, St. Patrick’s won’t be the same again,

Pamela is a Cambridge Lay Dominican. A graduate of the Royal College of Music, she was for many years a piano teacher. Mystical Rose started as a poem, which Pamela later set to music. Further harmonisations added by Fr Dominic White OP.

Glowing at dawn with the Rise of the Sun:

Thorns become stars for the crown of a Queen

In Flanders Fields, by Bruno Clifton

A Biblical scholar and Vice-Regent of Blackfriars Hall, Oxford and former Master of Novices at Blackfriars, Cambridge, Fr Bruno is also a graduate of the Royal Northern College of Music and has had numerous commissions, including from the BBC Philharmonic. Fr Bruno writes,

“In Flanders Fields’ was commissioned in 2007 by Fr Alain Arnould OP as part of a project at Brussels Cathedral. As Armistice Day (11th November) fell on a Sunday that year, Fr Alain focussed the commemoration on one of the Cathedral’s musical masses, in which the liturgy contained pieces of music at key points. For this project, composers were asked to set World War I poems in French, Flemish and English for Baritone and Organ. I was asked to set the famous poem ‘In Flanders Fields’ by Canadian physician Lieutenant-Colonel John McCrae. The recording is from the performance on 11th November 2007.”

Domenico is a physicist at Anglia Ruskin University and Lay Dominican. He has worked with NASA and CERN and creates music from scientific data. Domenico writes:

I recently concluded an Art Fellowship/Artistic Residence at the University of Exeter, where I worked as a composer in a team of biomechanists and mechanical engineers translating vibrations into sound: https://www.artsandcultureexeter.co.uk/creative- fellowship/human-and-structure-movement.

I believe that music is not just an amazing component of our lives; it is a wonderfully organised and rich language that we can use to describe the world around us. From a poetic and ingenious way to describe the motion of the planets, to the development of new tools for visually impaired doctors to detect cancer, I think music is at the basis of a quiet revolution in science.

I started working at the crossroad between music and science in the late 1990s, when I worked with a team of seismologists on the possible use of sound to make the powerful but silent vibrations of the Etna volcano audible, and help detect earthquakes. A few years later, one of my major outcomes, the reconstruction of the Epigonion, an ancient Greek stringed instrument mentioned by Athenaeus, using mathematical/physical modelling and computer simulations. I set up a project and led a team of scientists, archaeologists, historians, and musicologists, and we recreated the sound of its 40 strings. The instrument now lives as 3D model and a sound library (available for free), and it is featured in CD recordings and public concerts.

A couple of years later, I have been commissioned chamber and symphonic music for CERN 60th Anniversary (conducted by V. Ashkenazi, https://www.dailymotion.com/video/x26x6e9), music for the 30th Anniversary of the Web, designed interactive art installations based on CERN superconducting magnets, composed audio tracks for CERN promotional videos.

In a very special way, I love to think I am continuing what Kepler started four centuries ago, using the same philosophy and, inspired by his ingenuity, I started collaborating as a musician for NASA, organising since 2013 music performances based on spacecraft data, radio telescopes, satellites. My latest work is a series of flute pieces based on the sonification of Mars weather released in Nov 2020.
Finally, last year I was granted a research permit at Yellowstone National Park in the US as principal investigator for a music and science research project aiming at creating chamber music from geysers and other geothermal features. The project was featured be in a documentary for BBC aired in Feb 2021 and it has the National History Museum as one of the partners.”

Veronica is the name given to the woman who, in Christian tradition, wipes the face of Jesus as he carries his cross. She has also been connected with the woman whom he healed from a haemorrhage (Matthew 9:20–22, Mark 5:25–34, Luke 8:43–48). 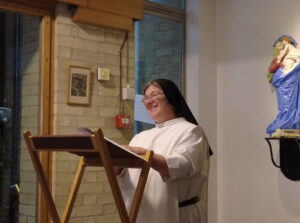 Sr Ann Catherine Swailes is Assistant Catholic Chaplain of Cambridge University and theologian, working especially on theology of suffering. “Veronica” is the sixth of her Station of the Cross poems (click here for Sr. Ann Catherine’s poems from the Poetry Night).

Veronica is set to music here by Fr Dominic White, and performed by the Schola of Fisher House Catholic Chaplaincy, Cambridge, under the direction of Carlos Rodríguez Otero. 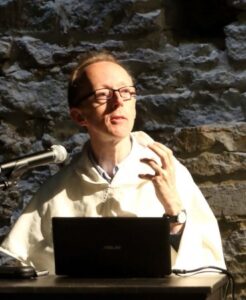 Fr Dominic is Bursar of Blackfriars and a Senior Fellow of the Margaret Beaufort Institute of Theology, Cambridge, with a focus on theology of the arts and Wisdom theology. He writes music mainly for choir and organ. He believes that writing music, and all the arts, are about showing to others what we have seen or heard in heaven. His inspirations are eclectic, ranging from Gregorian, Byzantine and Russian Chant to Renaissance music, 20th-century English and French choral and organ music, and minimalism. He is fascinated by the idea that in heaven musicians of all generations are together, making music to God. Poetry, place and nature are also important extra-musical inspirations for him, and he writes poetry too (click here for Fr Dominic’s poems from the poetry night). You can listen to more of Fr Dominic’s music here.

Salted with grains of blood his cheek

Pearls flung from the crazy crown

That jaunts on his burning, sweat-thatched head

Through the leering, holy-day town:

The dizzy clang of the soldiers, and the jerky falling down

Like a broken doll in the dust, and the spit and the slime.

To the stench and the shame and the sting

Of other blood, in another crowd,

In another, simpler spring.

In that hidden, stagnant place, I feel the kick and the dance

At his shining, tattered face, and fast I hold, as shielding him, lulling him then;

comfort-clothed in Jerusalem, I stand tall, a mother at last.

The Man Who Never Saw the Sea, by Eddie Zengeni, in celebration of his uncle who saw the sea for the first time when he came to Eddie’s and Emanuela’s wedding in Rome.

A tired old African man barefoot in his village, so poor,

He was a humble and proud Zimbabwean, who never left his land before.

Then his nephew came out of the blue, across the sky so far, he flew,

To finally meet the blood of his blood and the man who never saw the sea, before…

Tapfumaneyi was the old man’s name, as he looked the boy in his eyes,

He saw in his soul his younger self and the boy began to cry,

They talked and laughed for days on end, as if they’d known each other for endless years,

The old man showed the boy his roots, and he wiped away his tears, they sang.

And wiped away his tears…

He said ‘I’ve never seen the sea before,’

The boy promised he would take him there, before his time was over…and they’d be walking on the shore.

Walking on the shore

The sea reflected in the old man’s eyes, and now he’d fulfilled his dream,

They danced in the water under the sun and their souls today still sing, forever….